“Do not neglect to show hospitality to strangers, for by doing that some have entertained angels without knowing it.”  -  Hebrews 13:2

Our theme this week in worship is hospitality and we will focus on a story from Genesis 18 in which Abraham and Sarah show hospitality to “strangers” who turn out to be angels in disguise revealing a divine message of great importance to them.  The conclusion from this story, echoed in Hebrews 13:2, is clear: we never know exactly how, when, where and in whom God may show up and pay us a visit.  Being hospitable to others is a way of ensuring that we don’t miss that message. 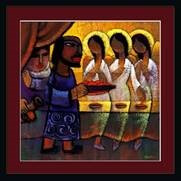 At a regional youth event, probably 15 years ago by now, I sat with a group from our church during the opening worship in the hotel’s grand banquet room.  We were sitting on the far-left hand side of the audience, approximately half-way back.  A praise band performed, different speakers spoke words of introduction about the weekend’s theme, and we (in the audience) were standing up and sitting down quite a bit.  All throughout this time, I happened to notice a strange man.  He was dressed in what looked like “coveralls” – some sort of uni-garment – with a stocking cap on his head.  Even from way off, one could tell his clothes were old and dirty.  He would walk slowly throughout the banquet room, shuffling his feet, and sitting down every so often.  After a few minutes he’d get up, shuffle on a little more and sit down in another open seat.  Once he even shuffled over to an empty seat in the row in front of us, before continuing on.

When it came time for the keynote speaker to give the opening address, this man was shuffling his way near the stage.  I’m sure I was not the only one who was, by now, wondering who this guy was and why he was in the room.  But as the minister at the microphone completed her introduction and spoke the keynoter’s name, the man in the coveralls climbed the stairs, turned, took off his hat, unzipped and stepped out of his uni-garment and introduced himself as the featured guest.

Perhaps, as you were reading these words just now, you could see where this was leading.  But his point that night was clear.  While he admitted that no one treated him poorly or asked him to leave the banquet room, no one approached him, asked him his name, offered a chair to sit in, or showed him anything else that we might consider a gesture of kindness, mercy, compassion or hospitality.  It was, rather, as though he were invisible.

As Christians, we live in the world and yet we are not of the world.  In the world, we are (sometimes rightfully) wary and skeptical of strangers.  Yet those cautionary instincts cannot prohibit us from our higher, not-of-the-world calling to show hospitality to strangers – not to withhold things like kindness from them.  For who knows?  We just might be welcoming into our lives a message from God that we most need to hear.

Posted by Michael Karunas with
January 24, 2018
in Minister's Article

“The Bread Which we Break…”

At the close of my column in last week’s newsletter, I stated that when it comes to communion how we distribute the elements is less important than that the elements are distributed such that “all are fed.”  Something similar can be said about the bread we eat in the communion meal.  There is no “right” kind of bread to serve, though individual congregations certainly have their preference.  Some serve thin wafers the size of a half dollar.  Others, like ours, offers smaller and harder pieces that more resemble pellets of bread.

Our primary founder, Alexander Campbell, believed that something called “the fraction” was important during communion. This referred to the practice of serving people from one single loaf that was broken during the communion  service.  For instance, as the words of institution were being spoken (“and Jesus took the bread, blessed it, and broke it), the bread was actually broken at that moment.  Thereafter, participants would eat a small portion from that original bread broken in the service.  This practice of “fraction” (the bread broken into fractions) held theological significance for Campbell.  It represented the one body of Jesus Christ, “broken” in death on the cross.  Moreover, it simultaneously represented individual members becoming the one body of Christ (the church) through the sharing of one single faith in Jesus Christ.

I was not made aware of this theological significance as a child growing up in a Disciples of Christ congregation.  Rather it wasn’t until graduate school that I studied these matters more closely.  Yet my home church did practice “the    fraction” every week in worship, even without naming it as such.  Ours was a small church and members would take turns supplying the bread for the communion meal.  The bread was nearly always homemade and the bread baker’s name for that week was printed in the bulletin.  My sisters and I would eagerly open the bulletin upon coming to church to see whose turn it was to bring the communion bread.  I’m sure we were less than kind with our comments if it was a member who was known to bring an “obscure” bread choice (like rye or some kind of multi-grain option, which to a child’s taste buds, was not that appealing).

My mother, of course, took her turn.  Every Monday growing up, my mom baked bread.  Hers was a sourdough recipe that used a sourdough culture dating back to a woman from Kansas in the late 19th century.  True story.  When my mom received the sample culture that forms the basis of sourdough bread, she received the story of its origin that went with it.  And the story stated that a woman began that culture, from which my mother’s was eventually spawned, in Kansas in the 1870s.  Every so often mom would “feed” the culture, sitting in a big glass jar in the back of the fridge and on Mondays she would take a small portion for that week’s batch of bread.  Mom always baked bread in the traditional rectangular-shaped pans, but there was one round pan that she only used for Sunday’s communion bread.  It was about half the size of a pie plate and I remember mom place that in a plastic bag, wrapping a twist tie around the end and setting in on top of the bible that she brought with her.

Since I first began receiving communion as a baptized believer in my home  congregation, I have had all sorts of communion bread.  The same can of said of the three churches I have served as pastor.  And all these years later I continue to believe that was introduced to me at an early age.  It doesn’t matter what kind of bread is used, only that bread is used in worship.  For bread, in whatever form or shape it comes, has a way of connecting us historically, throughout time, to our ancestors, and laterally, to one another, who partake of that same bread with us.