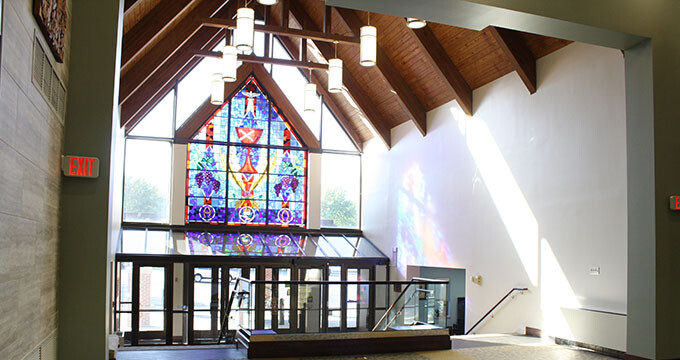 Like other denominations, Disciples are indebted to certain key leaders whose witness gave birth to the movement. An art medal, struck in 1972 and devoted to the Christian Church (Disciples of Christ), bears the likeness of Alexander Campbell and Barton Warren Stone. Two others, Thomas Campbell and Walter Scott, might well have been depicted. These four leaders are regarded as founding fathers.

In 1833, following a revival meeting conducted by Dr. Joseph Hostetler, a farmer and physician from Indiana, the Disciples of Christ Christian Church was started in Decatur. A few persons who had heard of Alexander Campbell, Barton Stone, Walter Scott, etc. were living in the area along the banks of the Sangamon River.

In 1834, Dr. Hostetler and a small group of people gathered in the Log Court House which stood on the town square, and organized the “Christian Church,” the third church to be established in Macon County.

In 1835, on land donated by Dr. Hostetler at the northeast corner of Wood and Water streets, present site of the Hotel Orlando building, a simple structure, twenty feet square was built for public worship and was used for twenty years.

In 1855, a more commodious and elegant brick structure was built on the present site of the Firestone Store, northeast corner of North and North Main streets.

In 1875, the building was replaced by a beautiful frame building dedicated February 27th, 1876.

In 1893, the structure was moved to a lot at 236 North Edward Street, but within a year, the congregation had outgrown the facility and a large tabernacle was built in the 400 block of North Church Street.

On April 2, 1905 the Central Church of Christ was dedicated and on January 8, 1932 the name was changed to Central Christian Church.

On Sunday, March 6, 1955 the first worship services were held in a new and larger Central Christian Church at the corner of William and Monroe Streets.

In 1988, Central added the Nichols Education wing to expand its church school facilities and to enhance its nursery school program. Here is a picture of the ground breaking ceremony.

In 1995, we celebrated the fortieth year at our new location by walking back to the Edward Street church, which is now Ebenezer Baptist Church.