Last Sunday in worship, we asked everyone to think about what scriptures they turn to when they’re feeling anxious or stressed.  We asked this during the announcement time as a way of “getting into” the theme of the message that was to come.

At our 9:15 service, there is a very active live-chat going on during worship and last week worshippers typed in their answers to that question in to the chat.  The response was so good we wanted to share with everyone.  Please use these scriptures if they help you in your own times of stress and chaos.  Blessings on your day... 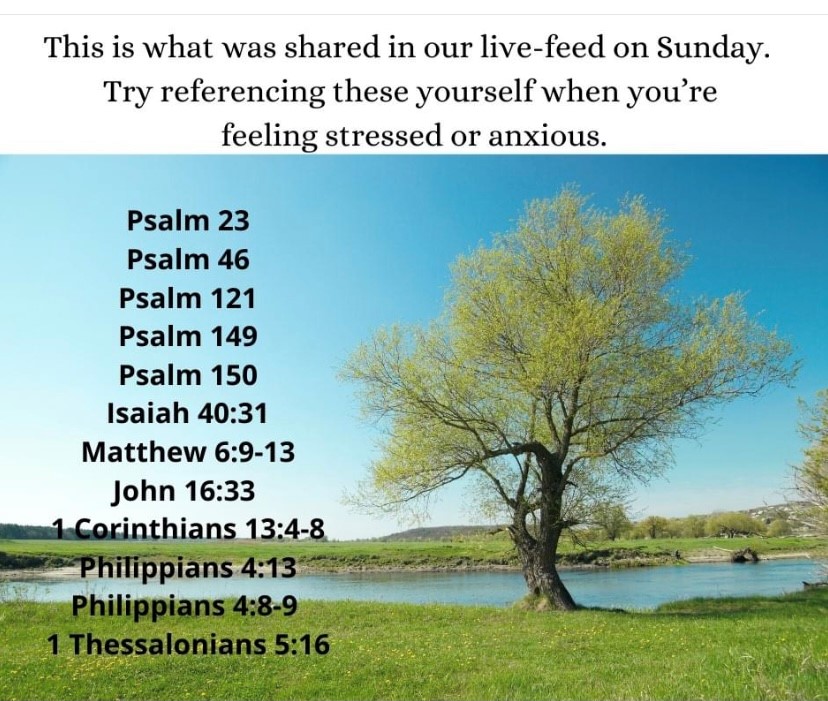 Posted by Michael Karunas with
February 13, 2018
in Reflections

In the spirit of Ash Wednesday and the upcoming season of Lent, I am reminded of this story on the sacredness of sacrificial love.  Join us for Ash Wednesday services tomorrow (2/14) at 12 noon in the Chapel or at 6:30 p.m. in the sanctuary.  Blessings on your day…

Time before time, when the world was young, two brothers shared a field and a mill.  Each night they divided evenly the grain they had ground together during the day.  Now as it happened, one of the brothers lived alone; the other had a wife and a large family.  One day, the single brother thought to himself: “It isn’t really fair that we divide the grain evenly.  I have only myself to care for, but my brother has children to feed.”  So each night he secretly took some of his grain to his brother’s granary to see that he was never without.

But the married brother said to himself one day, “It isn’t fair that we divide the grain evenly, because I have children to provide for me in my old age, but my brother has no one.  What will he do when he is old?”  So every night he secretly took some of his grain to his brother’s granary.  As a result, both of them always found their supply of grain mysteriously replenished each morning.

Then one night the brothers met each other halfway between their two houses, suddenly realized what had been happening, and joyfully embraced each other in love.  God witnessed their meeting and proclaimed, “This is a holy place – a place of love – and here is where my temple shall be built.”  And so it was.  The holy place, where God is made known, is the place where human beings discover the joy sacrificial giving.  For there, through love, they discover each other and themselves – for who they are and who they are meant to be.